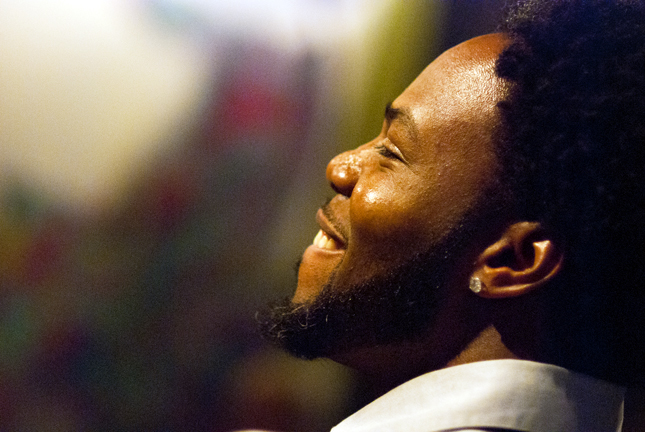 To celebrate four years of bringing beautiful musical events to Baltimore, Gypsy Soul presented a show at Teavolve featuring Detroit singer/multi-instrumentalist Dwele, along with Nicholas Ryan Gant, and Green Tea. Before the show, Dwele sat down to answer some questions and talk about his music.

A review of Dwele’s just-released album (his fifth), Greater Than One described the album as having an ‘80s vibe. I asked Dwele if he agreed with this characterization, and if so, if it was deliberate:

“I definitely would agree. But, it wasn’t deliberate. I had no idea it was happening until I got like four songs in and I listened to them back to back, and that’s when I noticed it kind of had a skinny-tie feel to it. There’s a lot of synths—a lot more synths than in past albums [of mine]. One song, ‘Going, Leaving’, when I was making the joint, I kind of felt the ‘80s feel to it. So, when I started writing to it, I deliberately put the guitar solo after the second verse. I feel like nobody does that anymore—nobody puts solos in music anymore. That’s ‘80s.”

Detroit, Dwele’s hometown, has birthed a remarkable number of musical talents in all types of sounds and styles. I asked how growing up in Detroit has informed his music, and this is what he had to say:

“It definitely affects it. Being that Detroit is the home of Motown—even though Motown isn’t even in Detroit anymore—I feel like our parents, aunts, uncles you know they all grew up with that Motown sound and with that Motown legacy kind of like moving at that time. So that influenced them to get into music, which, in turn we came up under that—there was a lot of music in the city. So, because of that, soul is really big, the gospel scene is huge, there’s a huge techno scene, house scene. There’s a lot of different musical genres in Detroit, so when it comes time to look for inspiration, it’s not hard to find in the city. It’s a very rich musical culture.”

Teavolve was packed to the gills for the performance. DJ Harvey Dent and DJ Phaze took turns on the tables before and after live sets from Green Tea (who also served as host for the evening), Nicholas Ryan Gant, and Dwele. Gant’s performance followed a storyline in which he meets a girl, falls for her, questions her taste due to her lack of knowledge of a blaxploitation character, then ultimately leaves and attempts to get over her. His cover of Curtis Mayfield’s “Makings of You” was nothing short of inspired–he certainly did the classic justice.

Dwele’s set was short and sweet–emphasis on both short and on sweet. He sang a new song and “Find a Way” while walking through the center of Teavolve singing to a variety of women in the crowd. The atmosphere in the place was kind of like a refined bachelorette party. There were a lot of ladies in the crowd visibly swooning over Dwele, but it somehow managed to stay fun and playful without crossing over into the corny zone. Dwele’s voice sounded impeccable live and although he didn’t need to do anything to win over the already adoring crowd, his charming presence ensured their approval.

(Click the photo above or here for more photos from the show.)